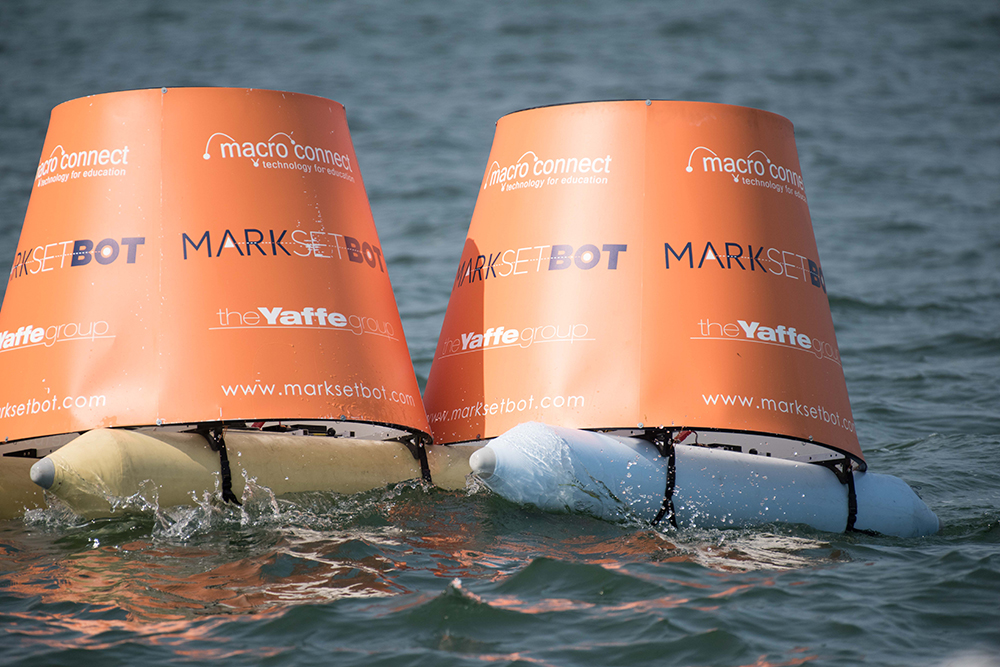 Perfection can be time consuming, and when time is precious, setting the perfect race course can lengthen time on the water. To combat this issue is MarkSetBot which has created what is believed to be the world’s first robotic race mark.

The MarkSetBot unit is approximately 8’ x 4’ in size, self-propelled, and uses GPS technology to zero in on a specific location and remain there until told to move. Controlled with a smart phone, a course can be set by pointing the connected phone at the wind or by using add-on wind instruments to research trends and then set the bearing based on that info.

The goal is for Race Committees to set up or change a race mark on a course more quickly and accurately than ever before. Founder and creator Kevin Morin conceptualized MarkSetBot while racing on Cass Lake (Michigan) at Pontiac Yacht Club, where he was a member.

“It’s a challenging place to do Race Committee work, as the wind is very shifty, and there are many areas that are too deep to set an anchor,” said Morin. “Often the Race Committee is forced to set a course that isn’t ideal, because it’s the only location where a mark can be set. Additionally, every racer at the club must volunteer for Race Committee twice a year; I figured if we could replace the mark set boat, each racer would only have to volunteer once a year, which would mean one extra day of racing for everyone!”

Morin gives credit for his inspiration to continue the project to a retired engineer and old family friend, the late Bill Margolin.

“He had a way of dissecting problems, and during the months before he passed away, we talked about the concept for MarkSetBot,” explained Morin. “He was fragile, but he still loved to solve problems, so I brought a prototype to the hospital one day. He suggested that I ditch the preliminary prototype and create a way to provide thrust via a propeller on a pivot. At the time, I thought he was crazy, but several weeks later, I saw a GPS-based trolling motor and I knew that was the way to go.”

MarkSetBot will be used at a stadium sailing event planned for the Great Lakes Boating Festival at Michigan’s Grosse Pointe Yacht Club (GPYC) on May 20. The plan is that within a timeframe of four hours, 18 races will be sailed off the club docks on Lake St. Claire. Each race will have four legs and last between two and three minutes. Skippers and crews ‘sail nine, watch nine’ to maximize fun for both competitors and spectators.

“This event is going to be a new experience for the race officials, the sailors and the audience, said GPYC Sailing Director Wally Cross, “and it’s great that we will have associated the innovation of stadium sailing with the invention of MarkSetBot.”