On the Water at Lauderdale Yacht Club 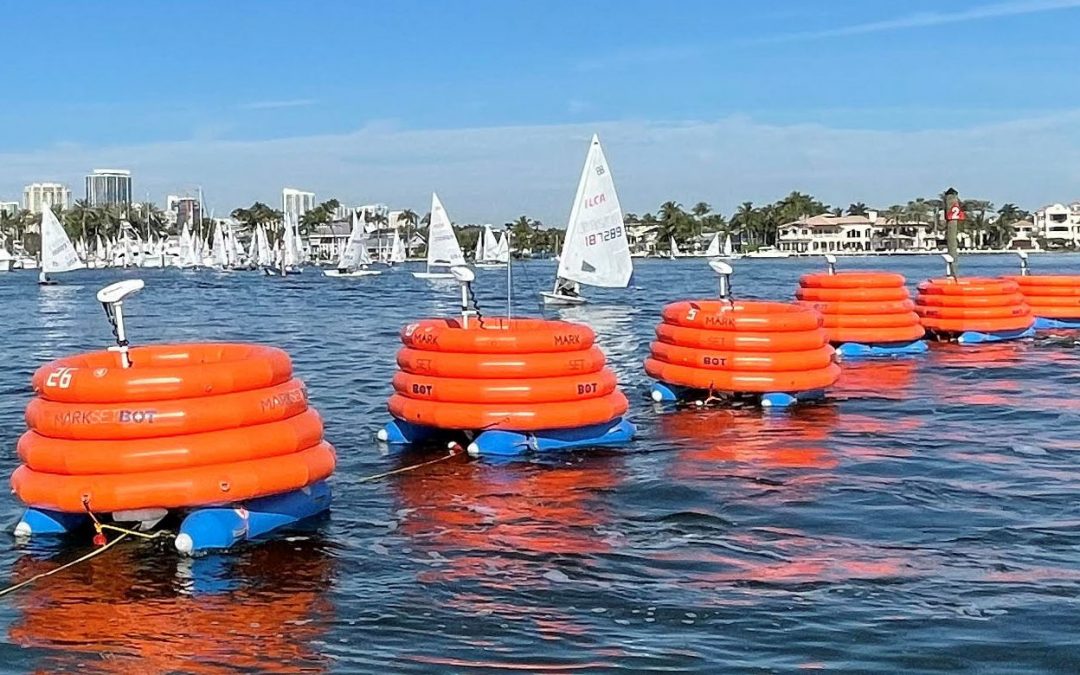 At Lauderdale Yacht Club (Florida, USA), interest in MarkSetBot stemmed from the problem clubs around the world were facing—how to successfully run events during a global pandemic. “Our initial motivation was to reduce race committee numbers,” Sailing Director John Casey said. “With everything going on with COVID we wanted to reduce the number of volunteers required at regattas and still have a way to run events.” MarkSetBot makes this possible with their robotic buoys (Bots) which are equipped with GPS and a self-propelling motor. Unlike traditional marks, Bots do not require an anchor, and anyone can set a course using the MarkSetBot app.

The efficacy of the technology was seen perfectly when Casey and Head Laser Coach Bobby Noonan ran and managed the Lauderbowl Regatta using Bots. “We were able to be the leeward boat [while] setting the leeward marks, two windward marks, two gates and the finish,” says Casey. “The two of us were able to do the jobs of eight people.” For many this statement shows just how effective and efficient Bots can make race management. On the other hand, it reflects exactly why some race committee members are nervous about MarkSetBot—they do not want to lose their job to robotic buoys. “I know our race committee jokes about that,” Noonan says, “but in all honesty, they couldn’t be more excited about these. Bots are not going to replace them. But you tell some of our RC members, ‘hey you no longer have to pull up 150 feet of anchor line just to move 10 degrees over,’ yeah, they’re ecstatic.”

Anyone who has sailed out of Lauderdale Yacht Club is aware of how its location can affect racing. Courses are set at least three miles off the dock, where the depth can be well over 100 feet. When using traditional marks, any course adjustments, even of only a few degrees, requires someone to pull up dozens of feet of rope. MarkSetBot simplifies this process dramatically. “We can put a Bot out in deep water and move the course easily,” Casey says. Noonan adds saying, “we are able to pivot the course around with a couple clicks of a button and all of a sudden the course is set at the new axis.” By largely reducing the time it takes to set and adjust a course, Bots allow sailors to spend more time racing. “MarkSetBot will 100% get you more racing in,” Noonan says. “Whether it’s super shifty and you need to pivot the course around, or you have big waves, you’re able to get out there and set a course quicker. You don’t need to worry about multiple mark boats pulling out tetrahedrons. Now, we literally have one or two people on a motorboat who have the app and who can effectively run an entire regatta by themselves.” 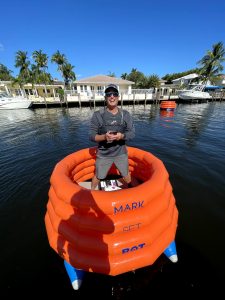 John Casey testing out the bots

For Noonan and Casey the most daunting aspect of using MarkSetBot was learning the app; “the first weekend we used Bots there was a little learning curve,” Noonan says. “It took us over an hour from leaving the dock to starting the first race. We had to figure out how to tow them the three miles out and learn how to use the app.” The best way to figure it out, he says, “not being afraid to play around with the app and the menus until you figure it out.” After less than a week of using Bots they cut the time it took from leaving the dock to starting the first race to 45 minutes. “Yeah, there’s the initial learning curve,” Noonan says. “But as soon as you figure it out, it becomes ‘wow, that’s easy!’”

For Casey, the real test was whether the Bots could handle the varying conditions they see out on the ocean. “We had them out there in 20 knots and 5-foot plus breaking waves, and they worked, we didn’t have any hiccups or snafus with it, the Bots went to the right place. I’m looking up the course at the rhumb line and it’s what it should be. And then it stayed like that all day long.”

At Lauderdale Yacht Club, these robotic buoys were originally a way to safely sail during a time many clubs were forced to close and events were canceled. Now, Bots allow them to safely, efficiently and effectively run practices and regattas.