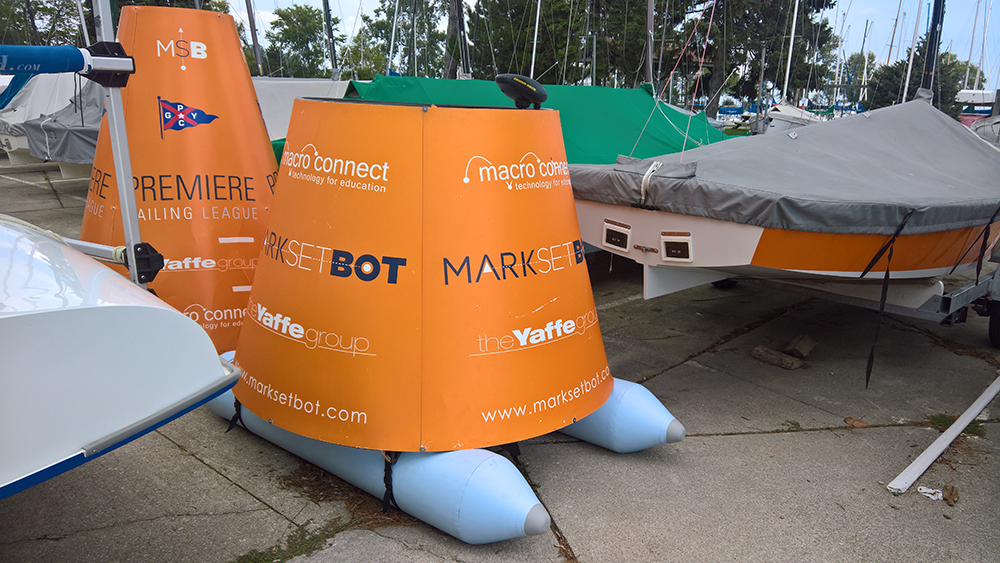 One of the last vestiges of sailing’s past — the ubiquitous anchored race mark — might be going the way of aluminum spars.

One day not long ago, Detroit’s Kevin Morin — a J/70 and Lightning sailor by weekends and IT specialist by day — had an idea. “I used to sail Lightnings at the Pontiac YC,” says Morin, “and there were spots in the lake that were over 200 feet deep — you just couldn’t set a mark there.” So, at times, “close enough” became ­acceptable practice.

These experiences, coupled with the challenges of finding enough volunteers to field a full race committee, got the wheels churning, and now, four years later, Morin believes he has a marketable product. Enter the MarkSetBot. Made from readily available parts — such as a trolling motor built for fishing boats — and controlled via GPS or over a cellular network, the user simply touches a point on a cellphone or computer chart, which communicates latitude and longitude via the Internet to the MarkSetBot, and off it goes.

“It’s a lot like what you have with an auto-pilot,” says Morin, “except you don’t have to be on the boat.”

Once in position, the MarkSetBot’s motor keeps it stationary. “If you imagine the center of a circle, it will move 5 feet in any direction from that point, which means that from one maximum direction to the other, it could move as far as 10 feet,” says Morin. “I was originally going to set it up to deploy an anchor, but it’s stayed in position so well, I’ve put that idea on the back burner.”

He’s tested the concept in winds as high as 17 knots and with 3-foot waves. “Waves just raise it up and down, unlike what they do to a boat. So it’s mostly being affected by the wind.”

The MarkSetBot weighs 60 pounds — a far cry from the 1,500 pounds the trolling motor is designed to propel, so there’s plenty of power. Depending on the waves, it can cruise up to its position as fast as 4 knots. According to Morin, waves don’t slow it down as much as they cause it to go slightly off-course. As a result, the MarkSetBot zigzags a bit and ends up with a VMG closer to 3 knots.

“We race within three-quarters of a mile from our yacht club, so when we’re about to pack up the RC boat, we send it out,” says Morin. “We can get it close to where we want it, and then once we’re on station, I point on my ­cellphone to where I want it to go. If we want it 10 degrees in another direction, on a mile-long leg, it might take it just under a minute to get into the new position.”

The most expensive part of the unit is the lithium-ion battery, which Morin estimates will power the bot for close to eight hours. And what about its range? Morin sets it at 2 miles, although in certain situations, such as if an event called for 5-mile legs, he could increase the range.

With the inherent stability of a multihull, the MarkSetBot also has a low center of gravity — a sort of keel, if you will. The motor head, which weighs 25 pounds, can be adjusted from 2 to 4 feet below the surface. The shorter depth allows it to be launched more easily from shore. The battery is also mounted low — almost at water level.

Durability? Morin says that although the mark has not yet taken a direct hit, the rubber hulls should allow it to simply bounce off a boat. The other good news is that there is no ground tackle to foul. So if it is driven out of position, it quickly returns to where it should be — no more off-station marks.

Although the MarkSetBot has had somewhat limited testing, it has already shown its potential. “One of the days we used it last summer, it was super shifty, and we did six changes of course. Normally, you get on the radio, if it’s working, talk to the mark-set boat about the wind, he pulls the mark anchor, then resets it, and you finally get to a point where you don’t want to do a course change because it’s too much of a hassle. But when you see this work, you think, ‘My God, that was so easy!’”

Morin also offers the mark with wind instruments that will stream data on wind speed and direction back to a cellphone at 10-second intervals and can broadcast this information for up to three hours.