100+ Clubs have experienced the Botter Way

Another MarkSetBot milestone is in the books. We’re proud to say our Bots have been used at more than 100 clubs around the world.

A lot has changed since we splashed Bot 0. Back then, we knew our MarkSetBots would change the future of race committee work. Now, we know the future is here. Our laser focus over the last 5 years has been on making the MarkSetBot simple to use and reliable in any condition. Light air, big breeze, chop — battle-tested MarkSetBot holds steady.

Don’t just take our word for it

Last weekend, MSBs marked the course for the Bay Harbor Cup for the Great Lakes 52 class. Over four days of racing, five Bots guaranteed every leg was square and handled all conditions like pros, from light and shifty breeze to a windy and wavy 26-knot day. PRO Dick Neville had this to say:

“The Bots are impressive. Move the pin at 5 minutes to the warning. Move or square the gate any time. Change the weather mark and offset for the second beat or between races. No problem. Blowing 20-25 knots with good sized waves – no problem.  We can simplify and automate the race committee functions. The future is here.”

A few highlights along the way to 100

Did you know MarkSetBots have been used at major regattas around the world? A sampling of events include:

We hear it again and again – once you’ve used a MarkSetBot, you don’t want to run a race without them! Two stand-out Bot Masters have hit big-time MarkSetBot use. 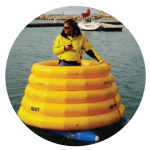 Carmen Somm of Digital-Sport-Tech has commanded the Bots 150 days.

With fewer volunteers, no anchors and fewer boats needed, MarkSetBot makes running high level races easier than ever.  Reach out to sales@marksetbot.com to learn more.